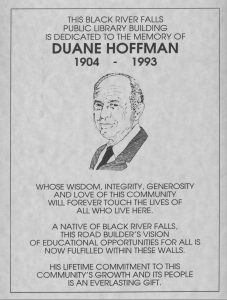 The history of the Black River Falls Public Library goes back to 1867 when a group of young men in the village (now City of Black River Falls) established a Reading Room. When the state passed a law providing for legal free public libraries, Black River Falls established the first public library in Wisconsin on November 25, 1872, a designation the community takes great pride in. By 1879 the library had 1,000 books. In 1890, Librarian Clarence Meek receiving $8 a month for his duties. In 1900 books were catalogued for the first time using the Dewey Decimal System. Annie Wylie became librarian in 1902 and stayed for 37 years. Since her directorship, seven individuals have served as library director. Several locations throughout the village/city marked the library’s home. The construction of the Carnegie building, in 1915 on Main Street, served the community for over 80 years. In 1978 the library joined the Winding River Library System. On June 18, 1995, the community dedicated the present library, featuring a Program Room, Children’s area, and the Jackson County History Room. The community supported the project by donating over $1.3 million. The library is dedicated to Duane Hoffman (1904-1993) whose wisdom, integrity, generosity and love of this community will forever touch the lives of all who live here.